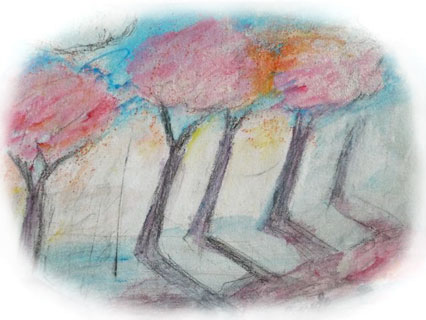 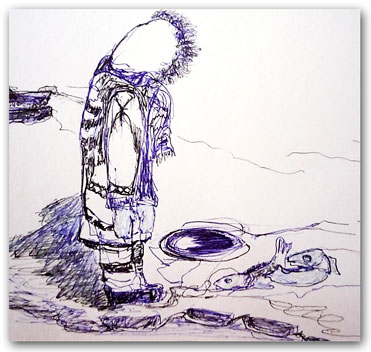 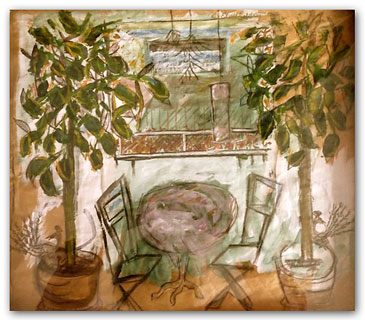 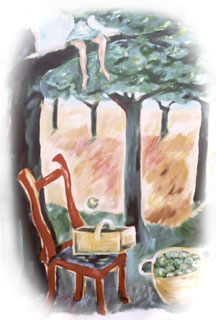 I’m drawn in by a

powerful pull to the globe

that large globe intersected by

an illusion of a whole but

held together in black

benign by the choice of colour

confrontational inhabited by a pretty

But on closer scrutiny many

Placed 3rd in the 'Poetry Challenge' write a poem, on the spot in limited time, about a work of art in the 'Lake' show April - 2011

The Painting on the Wall

Under a tree a chair is placed against

Golden rod glow from within,

The chair perhaps once seated

to the hilt with apricots, venison, mead,

Perhaps once seated farmhands for

after a day’s work.

Perhaps once a chair to step up

at the sink, a child washes dishes,

steps up to open the armoire,

The painting draws me in.

but filled with sounds of insects,

The chair placed in the shade,

A painting on a wall,

the perfect vehicle for time travel.

The poet had to respond to a painting in the gallery.

The title of the painting is 'Chair in Field' by Jean McCormack.

Lullaby for a Potted Tree

that wind rustling in your leaves

a breeze to shake some aphids

that rain polishing your trunk

the summer’s heat when

all is still and waits

that moon coming full over the lake

your place by that oak

do you miss all that

my love, my green screen

the apple of my eye

so weary you stand in your pot

by the window thick with frost

but, ah, with beads & trinkets

I dressed you to lift your spirit by and by

and tricked your supple growth

crave that rush of Robin’s song

there there these gloomy

at dawn, and then are gone.

after winter must come spring

ice fishing below the locks

i peer down that drill hole

what did i expect!

rises above the spill

Cindy the cat hunts again she

stalks kills then eats. In the morning we

kidneys and furry tails. It makes me sad,

I try to teach her- no don’t hunt, my cat, there’s

plenty of cat food in your dish.

She mieuxs and wakes me from deep

Sleep, she drops the prey right by my bed

I get wildly mad take that still warm

creature in my hand to hide outside

intent to bury it under the apple tree

at daylight to join the many little

What then if nights at full moon they

all as ghosts rise up and dance with

limbs outstretched a circle to music

not heard by you and me,

But dance they will all lit by silver

with cats Chantal & Sammy in the lead.

Dedicated to my dear friend Renate,

in her typically English/German vernacular.

Willi the cat scratches the carpet to shreds.

Ah, not quite dry  a few drops fall on me

wir haben not yet stuffed das Loch made

what does it matter – it’s spring.

snowflakes to the ground,

later during the long evening shadows

i move over them my spatial senses tricked unsure

if i am on firm ground

By the creek die Katze fliegt up the elm

into its top branches

i shout, nein, Willi komm down, don’t do harm

At sixty-five feet  the tree much

closer zum Himmel than me the dance

the futility of it all occurs to cat

On the Winds the Breath of Life

With each turn of my head

In the early morning sun iridescent

waving in the fish bowl vie

with delicate petals of salmon candy

violet of busy lizzies a

riot of colour against fresh

my heart leaps with

each eyeful of pink I fill my

then with pink then another

mingled with crimson the

all is white outside.

The breath of life I fashioned

after my needs with live trees

to be watered cared for

aerated with my kitchen knife

tricked to grow with

fertilizer brew, my breath of

for my head in sleep

inside reset each cell’s DNA.

the spruce seems green not black

red aspen branches wave at me,

hello, not frozen solid as they were a day ago.

The breath of life returned

last night sneaked up on us

while deep in dreams,

the outdoors beckons me

can’t hold the bush tree where

around each trunk to bare

From James Bay to Suriname

from Winnipegosis to the Florida Everglades from the Northern Polar Ice Pack to the Southern & back they fly,

great and small. They follow their instinct: navigate their course by stars sun

Ah, Big Dipper up there and

over here – Orion: on clear nights

From Manitoba’s wild milkweed to

by an internal clock driven by a secret compass.

For granted I took that

of returning geese that delicate

But now when thaw is up & ice is out

I scan the skies for skeins of

V’s & roam marsh and field for

are ploughed from Saskatchewan to 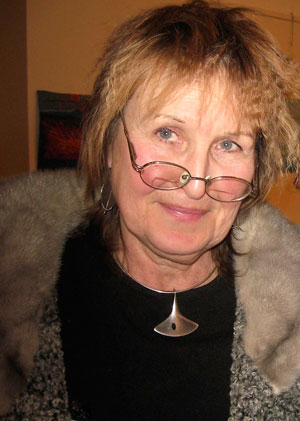 travels along the wavy

switches from lilac   purple to indigo

right says the voice in my

masquerading as a car now

up to its axle in sand

should have been sunk

i drop my shift

on willow bush   there

a swoosh of wings marks me

and through a sudden slice of

toxic yellow a mass of

with the silver shaft of

moon   my shadow long   the

Judges’ comments: A beautiful reminder that when life gives you lemons, you must surrender, and make a poem. ‘like tortured copper I meld’; Wonderful imagery throughout and captured attention from the beginning. ‘the accidental hitchhiker etched in starry darkness’ Top notch!

Those architectural shapes attributed to church windows through the ages

the image pulls at me

the Shaman in the Cathedral

but a photograph manipulated to boot

fringes hanging from the crossbar

plethora of visuals created after

o the sorcery of it all - 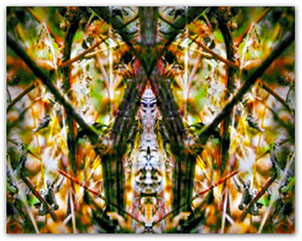 You can never have enough heart(s)

pants turned up to the knees,

the water cool on my skin

calming all turbulence within.

On the pier’s slender aspen rail

wing to wing. Into the coarse

sand I sink, the ancient granules

once mountains boulders glossed to

From the mass of beach shapes of

rocks jump out at me. Bits of glass

mean poor. The pockets of

at the Ship & Plough, Gimli, Manitoba.

In Defence of Artistic Interpretation

My name is Helma, I go by RogueRaiders, and I am an immigrant. I’m not talking about immigrants today. I thought I mention it because it is all in the news, right! I’m from Germany, post WW2 education.  I think of myself as an adventurer.

They collaborated in the magnificent statue that was commissioned to be in the Manitoba Legislature grounds and then removed.  It was removed because no sooner was this sculpture erected (very appropriate) in the grounds it was vandalized. (Look up Marieloudrieger2worldpress.com to view a number of photographs of this statue).  The statue was placed facing the river, an important aspects to commemorate Louis Riel. And they wanted to commemorate Riel - they wanted to commemorate what he was to a segment of our society who called themselves Metis.  It was time - he needed to be recognized as the father of Manitoba. Of course he was.  So, again, no sooner was the statue up it was constantly vandalized, garbage was thrown at it, rants were written on the sculpture.  I am not surprised.  The sculpture was 12 ft. high, higher than that of Queen Victoria, whose statue is sitting at the front of the Legislature.  It was taller than the Golden Boy up on top of the Legislature building.  Not surprising people thought ‘what is this! The sculpture was vilified, pulled through the dirt and even the genitalia was hacked off.

It stood there for 20 years.  Then the clamour for its removal got so loud and noisy that government people caved in and ordered it to be removed because it didn’t commemorate Louis Riel although, and I quote “any memorial has the potential to denigrate even as it preserves.” (article Manitoba History “Practical Results” The Riel statue Controversy at the Manitoba Legislative Building by Shannon Bower, Winnipeg, No. 42, Autumn / Winter 2001-2002)

The pubic clamoured so loud to get rid of the statue, they got their way. It was negotiated that Marcien should do another statue.  He was keen to do that, but before he got down to work, another guy was commissioned.  Miguel Joyal.  Marcien was dumb founded (I knew Marcien at the time and we talked).  Anyway what happened next was due to Marcien’s vision, I would say.  To quote Marcien’s lovely wife, Helene: “Marcien’s sculpture kept this deeply emotional Louis Riel controversy alive for 21 years.”  It gave the Metis an opportunity to actually figure out what they really wanted.  How to place good old Louis Riel back where he belonged and it was because of Marcien Lemay’s powerful & transcendent sculpture. In my mind he is the prime mover of the ‘happy’ outcome of this story.  Modern Manitoba Metis. Marcien Lemay’s sculpture was re-established at the Université de Saint-Boniface, a very apt place, as Riel’s grave is also in the Cathedral graveyard.

Miguel Joyal made his sculpture which is, at the present standing, in the Legislature grounds, in the tradition of a colonial.  Louis Riel looks like a colonial father. It had to be that way.  He couldn’t just be standing there like he was portrayed in Lemay’s statue.  He couldn’t be shown dishevelled & half-naked.  Louis Riel was voted 3 times into the Canadian Legislature, but he never took his place, he couldn’t get there.  He would have been arrested as soon as he crossed the Canadian border. So, tonight talking about my thoughts after I looked over all the ‘stuff’ written about the person Louis Riel, I think the first Louis Riel Sculpture – singularly powerful.

Today i laundered a mouse

all three inches with tail

some nasty smell from the laundry

alarmed me could be the

honey wagon going by and

sort the linen by colour

let the automatic do her thing.

At my desk i resume setting

while sewer odor lingers in my nose

down the basement i spring

to fetch the laundered whites

for sun is on the washing line.

What’s that? all over my clothes

black clumps and think my cat

with feathered prey into the dirty

but it is my clean wash that stinks like

i gag once   gag twice    at this putrid offense

one glance i dare

reach for the rubber glove   arm

stretched out head turned from

this thing i killed unwittingly,

a decent burial it needs under the old

apple tree with all the other mice  birds  moles

who succumbed to cat’s play  innocent

On the road from Siglavik

On the road from Siglavik

flashing through the beam

the one we call Fisch Adler and

lands on a hydro pole

she perches square her back to us

I swear Elf winked at me from the gallery wall

the portrait a photograph taken in three quarters profile

from the ancient tree towering over the

through the shadow mimicking sparks your pixie face immortalized in

fly-snapping ducks waddle in the enclosed

come come into my world the

to take to wings 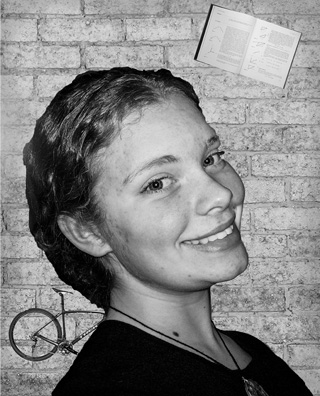